No Result
View All Result

Eritrea’s Ministry of IT/Technology is a Phony: Here is Why…

As a person who has a strong knowledge on computers, as well as the hardware and software found in them & some programming languages (JavaScript, Python, HTML5), I can tell right away if a person is well versed on the art of technology or is not. Kokob (if that is his online alias or his real name) claims to be the IT specialist of Eritrea. I have scrutinized his name and his Twitter account to see if he is doing any good for the people of Eritrea (because there are people working under PFDJ that do not involves themselves in politics and try to help develop the country and make the best of what they can.)

Happy New Year 2022 to the besieged nation of Eritrea and its people.

Unfortunately, I don’t think the “Ministry of Technology” is a fitting title for Kokob. For a person that constantly sends PFDJ injected political propaganda that he calls “news” and barely anything on technological developments on the country, it is quite hard to even say that Kokob is even fulfilling his duties in that role. Barely any accomplishments on the development of technology in Eritrea was mentioned by him throughout the existence of his account creation date, which was March of 2014. The only thing he has mentioned was strengthening cyber-security in Eritrea, which is a problem that has went unnoticed for years, and still is unfortunately. I highly doubt that any effort is being made into strengthening cyber-security. The country has the lowest internet penetration rate in Africa, so how could it be the government’s concern to fix their internet security problems? Kokob only made that statement to seem as if he is being productive and creating this allusion that the government is working hard to modernize the technology and digital services that run inside the country.

Why I think Kokob is a Phony (A Noob)

If you scroll through his Tweets (https://twitter.com/NeslekiEritrea) you will notice that he barely talks about his role as an IT Administrator in Eritrea. I believe the government badged him as an “IT Admin” to show that the country is trying to catch up in the age of digitalization. But even as Kokob is the Ministry of IT for Eritrea, there is a lot of things that I notice as a professional that just doesn’t sit right with me. If he was truly fulfilling the role of his job, he would:

– Ensure the security of computers/servers & other network appliances in Eritrea
– Since Eritrea doesn’t allow free business, it is ultimately his job to make sure all the computers are of compliance with security rules (Operating System is updated to the latest, no malware or security loopholes, strong firewall, etc.)
– Ensure that the computers in libraries and universities have the system requirements to do basic computer tasks such as word processing, spreadsheets, watch videos.

So far, I don’t see much of that. I would give the benefit of the doubt and say that the Mai Nehfi institution has updated & powerful computers (because what technical institution would it be without up to date computers?) But I don’t want to make Mai Nefhi the spotlight of the whole technological problem in Eritrea, because it will give the false illusion that the Eritrean government is making an effort to improve their telecommunication/computer problems when it isn’t.

The Problems I Have Noticed​

First, let’s talk about the computer cafes in Eritrea. Most of these computers right now are running Windows XP/Windows 2000/Windows 7. They either feature the Pentium 4 or Core 2 Duo CPU, which the latter has already been antiquated for basic use after the release of Windows 10, which is the current operating system that many PC users, businesses and governments have switched to. Both of these operating systems have been released for more than a decade, with Windows XP ending critical security support in 2014 and Windows 7 ending theirs in 2020. Not only will it be harder to surf the web given the speed of Eritrean internet, but there will be many constraints with using these computers for basic web browsing, not only just how fast they can load webpages, but the security problems that comes with it as well. In 2017, a ransomware has swooped the digital world, demanding people to pay a certain amount of money to regain access to their computers. Eritrea could have been the hardest hit country if the amount of people using the internet increased significantly.

Kokob has never addressed these concerns. He made a statement this year claiming Eritrea will strengthen their cybersecurity, but action speaks louder than words. Given how much he boasts more about propaganda and not focusing on his job, I believe he said that to give the false illusion that the Eritrean government is actually going to do something about it. But hey, we all know their track record, PFDJ are never honest and true to their words. 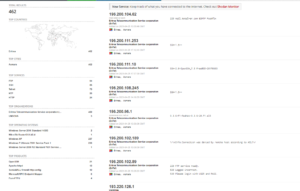 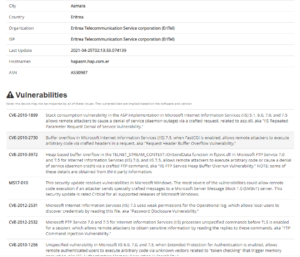 The worst thing about Shodan.io is is not only is it able to distinguish what kind of device and model it is, it also highlights the security vulnerabilities for each appliance. I don’t know if Kokob is even aware of this or is just too embarrassed to address this mess.

Lastly, I want to talk about the home internet service that has debuted on April of this year. When I heard it was ADSL, I was not so enthusiastic, but I knew it would be good enough for basic web browsing, email, watching videos (hopefully the people back home would know the crimes that have been going on behind their back.) But of course, I felt skeptical about it, because this is PFDJ, the political mafia that cannot be honest. 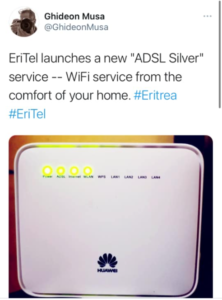 I did some more research about the “ADSL Home Internet” service, and I was baffled at how outrageous it was. For 66 US Dollars, you get 256kbps internet. 256kpbs internet is almost the equivalent of dial up internet. Worst of all is this internet is pre-paid, you have to top up after exceeding the 1GB use limit. 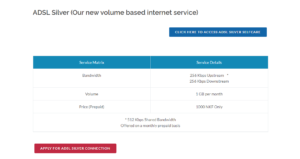 If anything, this seems to be a poor attempt to modernize the Eritrean internet/telecommunication service. There is a lot of work and investing to be done in order to achieve higher and faster internet speeds. The copper cabling that connects home phones in Eritrea were put in by the Italians over a hundred years ago is the bottleneck of internet speeds and telecommunications in Eritrea. The vast majority of countries (especially in Africa) have now moved to fiber optic cabling, which is way more durable and reliable compared to copper cables. There is no excuse that Eritrea, a country that is not landlocked, should ever have these internet speeds. Underwater fiber cables can link Eritrea to the Assab or Massawa port. The boundaries are endless, but is the Eritrean government setting the bars high enough? No, and that is something Kokob and his colleagues refuses to admit.
Tags: african internetafrican technologyErisat technologyeritelEritreaEritrea interneteritrea telecommunicationseritrean internetinternet cafeinternet in africainternet in eritreatechnology africatelecommunications in eritrea
ShareTweetSendShareSend

Happy New Year 2022 to the besieged nation of Eritrea and its people.

Is Eritrea a Socialist or Communist State?