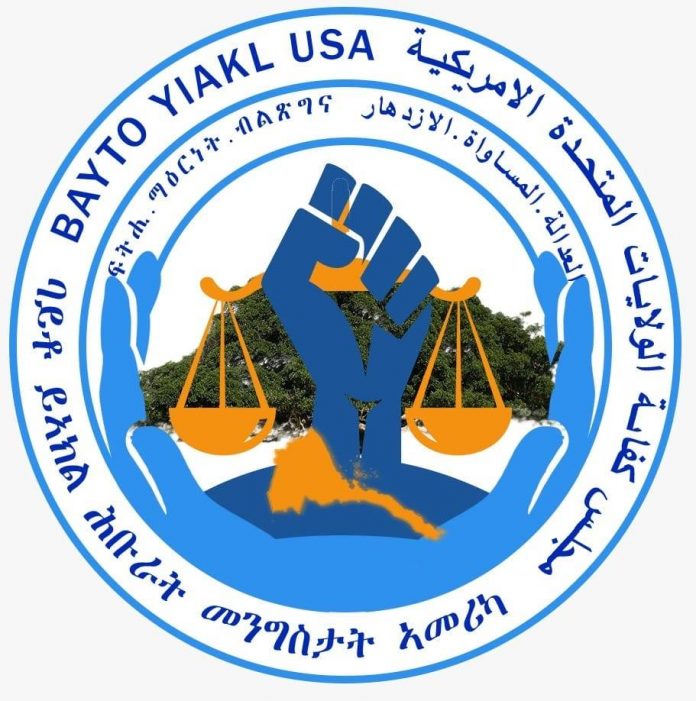 Bayto Yiakl USA has successfully commemorated its first annual conference on the 25th and 26th of September 2020 under the slogan of “Harmonized Work for A Secured Future.”
Bayto Yiakl USA has conducted its first Annual conference virtually via a zoom conference which was also live streamed through Facebook. As such, the Eritrean community across the world were able to fully follow it from the comfort of their homes. At this historic virtual conference, Bayto Yiakl USA has assessed its yearlong activities – (its strengths, weaknesses, opportunities and threats), and set up its future plans. At the end of the conference, Bayto Yiakl USA has elected its 9-member executive body which has the authority to lead the Bayto for two years. Generally, at this historic conference, Bayto has clearly revealed how the mass movement that has started more than a year ago by voicing out the phrase, “No More Silence, Enough to dictatorship, and Enough to Fragmentation” has overcome the challenges put forward by its enemies, and how it successfully accomplished its political activities in the midst of such challenges.
Members of this conference have unanimously agreed that all the challenges that has been targeting Bayto Yiakl have sourced from the divisive espionage tactics of the PFDJ regime. This conference has underlined the fact that the regime has been utilizing such divisiveness right from the inception of this Bayto because the regime knows that the time the Eritrean people come together against this regime, it will be the beginning of the end of its rule. The regime waged a failed campaign of disinformation such as labeling the movement as regional and funded by Weyane. However, the fact that no one can overpower a mass movement like Bayto Yiakl, the PFDJ regime’s conspiracy is not going to work as planned. Bayto believes the rebuttal of the regime’s evil conspiracy can only be realized if we as people become tightly organized among each other as justice seeking people in general and as Bayto Yiakl USA in particular. Bayto reminded to every conference participants (members and invited guests) and to all the Eritrean people who were following through the window of Facebook that safeguarding our people and our country Eritrea is a top priority, and it believes that the responsibility is vested in the hand of the Eritrean people.
One of the pride worthy achievement of Bayto Yiakl USA is its emergency response initiative that was initiated and organized during the outbreak of COVID-19 with the aim of supporting our people during this difficult time of the pandemic. Our Bayto in collaboration with other sister civic organizations and other Eritrean Yiakl movements across different part of the world has collected above $800,000 US dollars mostly from the Eritrean in the diaspora community. According to the report given by the department workers during our conference, so far above $270,000 has been disbursed to Eritrean communities living in the refugee camps bordering Eritrea who are the target of the aid’s mission.

Bayto Yiakl USA condemns all sorts of distortion from focusing on the dismantling of the regime and its institutions as unwise and unintelligible. The PFDJ’s regime has been doing unprecedented damages to our people and our country. Therefore, Bayto Yiakl USA calls all stakeholders of the Eritrean struggle for justice to come together as soon as possible lest their people extinct and the sovereignty of their country compromised. Bayto condemns all kind of excuses used by Eritrean justice seekers to avoid joining their hands with their counterparts in the struggle for justice and against the PFDJs regime as irrelevant.
Bayto Yiakl USA believes that the Eritrean people have been betrayed by the PFDJ’s regime. It is true that the Eritrean people are among the few people in the world who earned their independence without external support by paying tens of thousands of their productive youngsters. However, the PFDJ’s regime policies (both domestic and foreign) have betrayed their whims and holly expectations and consequently, they become the victim of exile into different corner of the world. Therefore, Bayto Yiakl USA condemns silence during this time of the prevalence of the plight of the Eritrean people as a betrayal of trust given by the Eritrean martyrs to every one of us.
Bayto Yiakl USA has assessed in this conference that the weaknesses of the justice seeking political groups have a big contribution in lengthening the suffering of our people. Despite the fact that the regime’s huge budget allocation on its espionage tactics and its access of to the unproportionally big wealth stollen from the Eritrean tax payers is delaying to the needed regime change, had the justice seeking political organizations come together, political change in Eritrea would not have taken this long before it is realized.
Bayto believes the main source on which our struggle should depend on is our people. However, as members of this world, it is also a must to seek other international and regional governments and organizations which can support us in achieving our goal of toppling the dictator. However, this is not possible without the unity of our struggle because many governmental and nongovernmental organizations want to see how powerful we are before they grant us their diplomatic credentials. Therefore, our unity is critical for our diplomatic success.
The conference participants have concluded that tolerance to our differences and the desire to work together is a prerequisite for unity. Therefore, at this critical juncture of our people and our country, any political, civic and or religious organizations who claims itself as someone who cares about the wellbeing of its people and its country should leave all secondary issues to the side and focus on how to get rid of the brutal PFDJ regime.
At this historic two-day conference, a big number of solidarity messages by representatives of Yiakl movements from different part of the world, prominent Eritrean political analysts, artist, and intellectuals and scholars were presented.